Today marks the centenary of the 71st (City of Ballarat) Infantry receiving  Regimental Colours, as reported in both today’s Courier, and the Courier of 19th October 1914, which reported on the solemn ceremony which took place at the City Oval, attended by the Governor-General Sir Ronald Munro Ferguson and Lady Ferguson.


The first part of the article stresses the gravity and importance of Colours, and how they will be protected right to the very last. 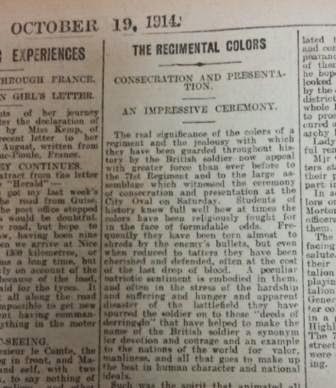 If you follow this link to TROVE you will be able to read the article in full, which describes the Ballarat companies parading and marching from the Curtis St Drill Hall, up Sturt St to the City Oval, where the Colours were presented. It happened that the South Street Highland Gathering was in full swing at the time, considered appropriate given “what Highland regiments have done in the Empire’s battles of the past”.


Another step in Ballarat soldiers’ preparation for war.  The war still seems far away and an adventure to be part of. Some worry it will be over before Christmas, before they even get away from Australia.
Posted by Ballarat Library at 3:49 pm