A descendant of Chinese goldminers joins up


One of the final trees to be planted in the Avenue of Honour - number 3351 belongs to a soldier named Clarence Rupert Lepp. It was planted by Miss M Streeter on June 9, 1919.


Clarence was born in Ballarat East in 1895, one of nine children born to James Henry and Emma Dinah Lepp (nee Foon). He gave his occupation on his enlistment papers as 'ham and bacon curer'. Clarence’s grandfather, James Wong Lepp, was a Chinese miner who emigrated to Victoria from Canton in 1853. James later became the manager and owner of the Golden Point Hotel.


Clarence enlisted in the AIF on 15 July 1915, some eight weeks after the disastrous landing at Anzac Cove in Gallipoli. That July saw a huge upswing in the numbers of AIF volunteers, with over 37 000 men joining up.


Clarence's family were well represented in the AIF, with his two older brothers and three cousins also enlisted.


At the time of joining, Clarence was just over 20 years old. Recruitment criteria had previously been quite strict in the AIF, with soldiers having to be at least 5 feet 6 inches but in July these restrictions were lowered so that Clarence, at 5 feet 2 inches was now eligible to join up. Clarence's father had died in 1908, so his papers give his mother as his next of kin.

Private Clarence Rupert Lepp was assigned to the 4th Reinforcements of the 24th Battalion and, after rudimentary training in Broadmeadows, sailed for Egypt at the end of September aboard HMAT Honorato. 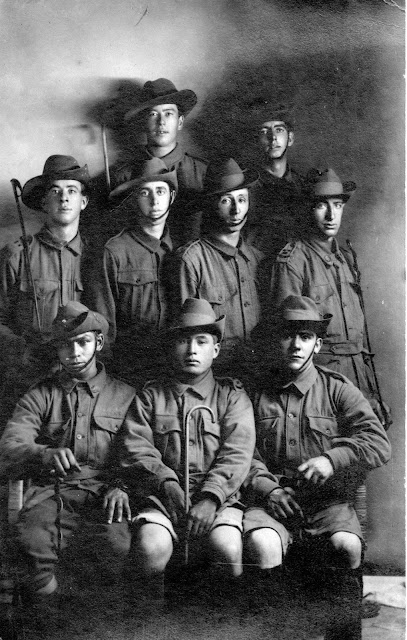 Clarence Lepp is sitting front and center in this photograph, taken sometime before his embarkation in September 1915. His brother James is standing behind him, second from the right. This picture includes other diggers of Chinese descent and is a very historically important photograph.  It was very kindly lent to us for use in this blog by Susan J. Dick, who received the photograph from her mother-in-law, Patricia J. (Egan) Autry, a niece of Albert Mong, the soldier sitting at lower left.
The soldiers' names, from left to right, are:
Top: Albert Hon, John Fenotti (d.1916),
Center: Leslie Richard Robertson, Albert George Crees, James Edwin Clarence Lepp, Harold Furlong,
Seated: Albert Mong, Clarence Rupert Lepp, Stanley Welsh (d. 1917).


Posted by Ballarat Library at 2:59 pm