The Diary of C.W. Kyle continued

Last week we introduced C.W. Kyle, a steward aboard His Majesty's Troopship Borda, in 1916. Kyle kept a diary during this and later voyages, and for reasons we have yet to discover we hold the original in the Australiana Research room at Ballarat Library.  This is the second part of the first voyage he made, and continues on from last week's post.  This voyage is relatively uneventful compared to what is yet to come, but be warned there are confronting descriptions of bullfights here.


February 24th
Arrived at Barcelona 11 A.M. 2nd City in Spain. Population one million.
A submarine followed our Ship 160 miles almost into the Harbour.
A Lovely City – beautifully clean – situated on the Garden Shores of the Mediterranean Sea.
No children allowed in its Streets after nightfall. Likewise no children under 15 allowed at Picture Shows.
Shops open at 2 PM afternoons and close at 2 A.M. morning.
No bits allowed in Horse's mouths. No whicps carried by drivers. Yet in this City at a bullfight I saw 14 Horses blindfolded let loose in a ring and they were gored to death by infuriated Bulls.
Shops & Post Offices are open all day Sundays. Persons posting letter put 1/2d stamp on & the person receiving it pays 1/2d also.
Barcelona is a Neutral Port but is infested with German Spies. 15,000 Germans came to Barcelona from Portugal in one month.
A Cemetery is here containing half million dead & there is not a grave. Coffins are placed on ledges and bricked in.
A woman accosted me at Post Office one morning & asked me many questions as to where I came from, whither I was going, what ship I came in and what we had on board.  She was a German Spy receiving £50.00 weekly.


February 25th
Ship’s Captain Millington warned the Crew not to go into any house, not to enter into any conveyance, not to talk about who they were, &c as it would help our enemies.


February 27th
Went into a Bullfight, 45,000 people present. A Sunday afternoon £16,000 were taken at the gates – 14 Horses and 10 Bulls were killed.
The most beautiful women in the world are here. Saw them clap their hands with joy at a Bull goring a blindfolded horse to death.
The Matador or Toreador who kills a Bull is paid £300 for each.
Went into the Post Office enquired of Official where the Bull fight was to be held.  He said “he no comprehend English – scribo (meaning write it down). He gave me pencil & paper I wrote down where is Bull Fight today. He went away and on his return with a bundle of letters in his hand said “Sorrier Monsignor no letters here for Bullfight.”
Mothers are very fond of their children. This morning I touched a baby on the cheek that a Mother was holding in her arms. The mother spat at me.
Saw Catholic Cathedral here costing £1,000,000 to build and has been building for nearly one hundred years.
Saw Christopher Columbus’ Monument 285 feet high. The Statue at the top is 65 feet high.
Visited Mt. Tibidato. 10,000 feet high went up by Cable Tramway.
On the top is a magnificent Roman Catholic Church. Service was being held – everybody was invited to attend irrespective of creed or belief.
The Cemetery here contains the most costly monuments in the world. Was informed that one alone cost £40,000. It is that of a wealthy Spanish Nobleman’s Son and is guarded night and day by Soldiers.


March 5th
Sunday. Today is Liberty Sunday. No arrests made by Police. It is a day of squaring accounts by having it out. Saw more fights today than I ever saw in my life.


10 AM today saw the grand 8 hours procession. It is said there were ¾ million people in the Streets. It took 3 Hours to  pass a given point. The most comical and grotesque costumes were displayed. 1 PM today a procession of Motor Cars passed down the Gracia de Ramtha – this means “The favourite resort of the Tourist.”
Was informed there were 4,000 Cars in procession and told some of the Cars were worth £5,000. The Wheels were studded with precious stones.


3 PM. today (Sunday March 5th) went to the Grand Catalana which is the Botanical Gardens. Paid 3d for a chair 10,000 people present. The Conductor stands on a Pedestal in the centre. The orchestra of 500 Stringed Instruments are all around him, then come the audience likewise seated in a circle.
Heard the most beautiful music “La Paloma”, Tosti’s Goodbye “Lucia de Lammermore”, “Home Sweet Home” were played.
Never expect to hear the like again until I cross the great divide.
After every number was performed there was no clapping or applause. The whole of the Male portion of the Audience just raised their hats and sat down.


March 6th
Monday. Visited the Agricultural High School.  It was formerly the Residence of Sir William Hamilton – British Consul. Ambassador and Husband of Lady Hamilton, immortalized by her Friendship with Lord Nelson of the Victory.  Our Ship is anchored in the very spot where the Victory lay when Lord Nelson visited Barcelona.
At 4 PM today the British Consul visited our Ship the Borda and warned the Captain to get away as soon as possible as the ship may be blown up.


March 7th
3 A.M. this morning was on duty, discovered a boat with three occupants approaching the rudder of the Ship, raided an alarm.  They made off. This morning the Hawser of our ship was cut.
Left Barcelona for Marsailles [sic] France at 3.30 PM. after a stay of 14 days, whereas we only ought to have been in Barcelona 5 days at most. Had 65,000 bags of wheat to unship and for days there appeared to be no effort to unload it.
Determined on my return to Australia to acquaint the Commonwealth Authorities with the fact that some responsible person should be appointed to protect the Interests of the Commonwealth Government.
The Captain watches the interest of the Ships Owners but no [one?] is there to watch interest of the Charterers of the Transport.  When the Wharf Labourers commenced to work the whole cargo was discharged in 5 days but it took 8 days to get a start on.


March 8th
Arrived at Marsailles at 1 PM only remained here 4 hours.  We are on a fools errand. This valuable Ship and Crew of 300 Men have come from Barcelona right in Submarine zone only to go straight back to Port Said.
We return in sand ballast Could have had Cargo of Marble from Leghorn and other Cargo from Naples.
Somebody has blundered.


March 13th
Passed hundreds of dead bodies of Soldiers floating about. It was those of the French Troopship La Province II, submarined the night before.


March 15th
Arrived at Port Said after an absence of One Month. Travelled 7,000 miles in danger zone in order to deliver the wheat Cargo. Took no troops from Egypt or brought any back from France.  Took Guns off. No Shore leave granted.


March 17th
Left Port Said for Australia at daybreak. Arrived at Suex at 11 PM.
Ten miles from Port Said we passed an Armenian Camp composed of 3000 Armenian Mothers and their Children. All were rescued from the Turks in Asia Minor. The Husbands had been all killed by the Turks. A similar fate awaited the Mothers, but through the timely action of the Pilot of an Aeroplane that swept over Erzeroum, these women were seen and rescued from the Turks and brought to this camp by Six British destroyers.
They waved to us as we passed through the Canal.
I felt proud I am a British subject.


March 18th
Left Suez for Australia at 30.30 PM [sic] . Expected a large number of troops for Australia, had everything ready. None came returned all the way to Australia with an empty Ship.


March 20th
Passed H.M.T. Ballarat in Red Sea. She came quite close to us. Decks crowded with Troops going to Egypt.
Passed Aden at midnight.


March 24th
Passed Cape Guardapin 6 A.M. Lost sight of land, will not see it again until Fremantle is reached in 14 days.


April 7th
Reached Fremantle at 9.30 AM anchored outside. Berthed ship at Wharf started to load wheat after discharging ballast.


April 13th
My Birthday.  Left Fremantle for Melbourne at 6 P.M.


April 19th
Passed Cape Otway at 7.30 AM. entered Port Phillip Heads Victoria at 1 PM. Anchored at Port Melbourne at 4 P.M.
Thankful to be back in Melbourne again after 17 weeks. Travelled 24,000 miles. Had no deaths on board.


April 20th
Attended Melbourne Shipping Office – received my Discharge Certificate. First Class for Honesty, Ability and Good Conduct during my term on H.M.Troopship Borda For voyage from Melbourne to Egypt, thence to Spain, France and back to Melbourne.

God Save the King 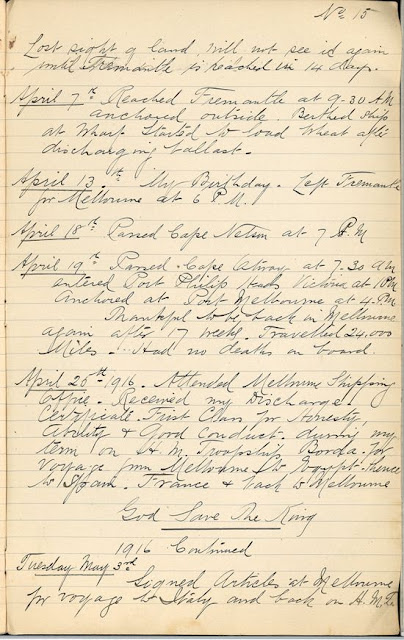 As you can see the diary continues on with another voyage, this time aboard HMT Anglo Egyptian.  We will continue the diary next week.

The National Archives holds microfilmed employment records for Australian seamen who served on Australian merchant vessels. The records are arranged by family name and give some personal information, the name of ships and dates of service.

Posted by Ballarat Library at 11:48 am