Now here is something very interesting


Here in the Australiana Room we have an original diary dating from 1916, written by a man who served as a steward on troopships during WW1.  We thought this would be an interesting thing to add to this blog, allowing the diary and the stories in it to be shared.  And we will blog it, over the next few weeks, but first we have to share some of the surprises we have found – without ‘spoiling’, if we can.

The diary's author is C.W. Kyle.  We believe him to be a Ballarat person originally, or else why would the Ballarat Library be holding the diary?  However, we can find nothing in the records of anyone of this name, nor even a Kyle family in Ballarat at about the time he should have been born (approximately 1871, by the diary).

We have been transcribing the diary, but lately have found in our collection a transcription of the diary already made, by someone by the name J.A. Walker.  Unfortunately Walker only leaves very cryptic clues as to how he (or she) came to find the diary (and where), but Walker was impressed by the diary and like us, wished it to be shared to a wider audience.  Because the hand writing is somewhat a strain to read, we eagerly read the transcription, uncovering humorous anecdotes, accounts of forgotten aspects of WW1, and some astonishing bits of Ballarat history.  It's not too big a statement to say, the diary has opened the proverbial "can of worms".

So below we present the first few pages of the diary, transcribed and also in digitised form.
Next week we will share more from the diary : please follow the posts to discover what we have found out about Mr. Kyle, and his exploits. 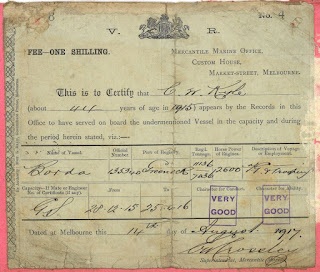 Left Williamstown Melbourne at 4 P.M. with 65,000 Bags of Wheat bound for A Mediterranean Sea Port


Appointed Night Officer of the Ship. Duties to patrol Ship from 11 P.M. to 6 A.M. Report to Bridge All’s Well or otherwise every hour.  Attend to Officers and Engineers. Call Crew at 5 A.M. Sign Night Officers Log at 6 A.M. Keep diary of any incidents that occur during the night. 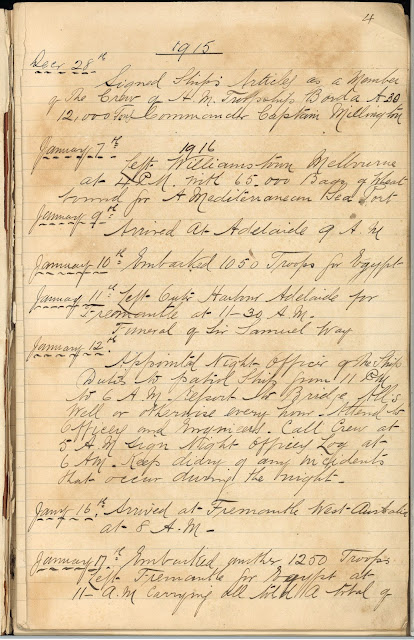 
First Sunday Service at Sea conducted by Revd Michael Bell - Military Protestant Chaplain – In his address he told the men that there were three things to observe to get to heaven.
First       Holy Baptism
Second  Holy Confirmation
Third     Holy Communion
A member of the Ships Crew suggested that a brick be thrown at him.


Crossed the Equator at 2 P.M. Great fun. A large canvas bath was erected on Deck – everybody who came along was dipped irrespective of rank, title or position. A Military Officer showed fight and he was given an extra dose.


Saw several young Australian Soldier lads about 18 to 19 years of age looking intently over the side of the Ship I asked them what they were looking at.
They said – we want to see the Line we are crossing -


Most beautiful sunsets I ever saw. It seems as if all Heaven were opened to view.


We are now off Cape Guardafin Coast of Africa. Have travelled 7,000 miles without seeing a Ship. All lights are out. 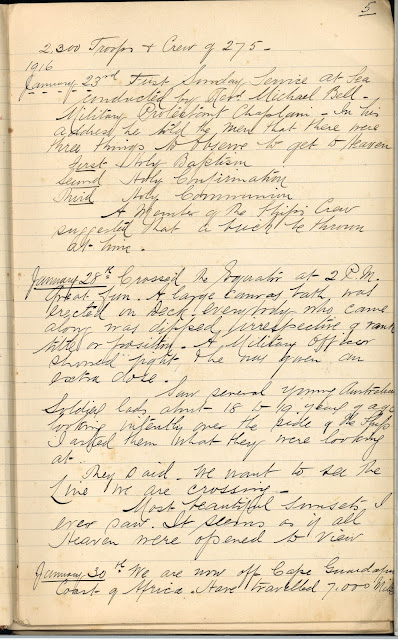 
Entered Straits of Babelmandeb at 2 A.M.


Passed 12  Apostle Islands. One stands out alone from the others. On it is a Light House. The Island is called Judas Iscariot.


Disembarked Troops 16 Special Trains were waiting to convey them to Cairo. Three Australian Soldiers were riding on top of a railway carriage instead of inside. The train swept into a Tunnel and all 3 were killed. 20 Troopships. 14 Battleships are all here.

February 9th
Left Suez for Port Said at 9 A.M. a distance of 96 miles. Steamer travels 5 knots an hour.
From Port Said to Suez there is not a part of the Canal but what is not guarded by a Bayonet, a Rifle or Sword.  It is estimated there are 180,000 Troops on duty.
In the Bitter Lakes we were stopped by British Battleships and had to produce proof we were a British Transport.

February 10th
Thursday. Arrived at Port Said at 3 AM. Hospital ships, Merchantmen, Battleships and Transport by hundreds were all here.
Strict Military Law no on allowed on shore.
Fixed two 4.7 guns and took eight Gunners on Board.

February 17th
Left Port Said for Malta at 6 P.M. When we were 80 miles from Port Said a wireless Message was received from Egypt instructing the Captain to return at once to Port Said.
Met two Mine Trawlers who gave fresh orders.
Don't know where we are going.

February 21st
Monday. Passed Malta at 7 A.M. Lookout announced that an object which resembled a Sub-marine Periscope was visible on Port side.
Six shots were fired from guns. The concussion of the firing shattered the telegraphic apparatus connecting the Bridge with the Wheel House.

February 23rd
Heading direct for Barcelona (Spain) sighted Sardinia Lighthouse at 3 A.M. Wireless Message from England reached us at 4.30 a.m. saying Erzervum Asia Minor had been captured by Allies and 40,000 Turks taken as Prisoners. Also an enemy Submarine had been sunk. Sighted coast of Spain.

Posted by Ballarat Library at 4:45 pm