Keith Murdoch (1885–1952) wrote this now famous  letter shortly after arriving in London to take up a new job. He had just spent four days witnessing the bloodshed and chaos on the Gallipoli peninsula and he wrote his letter in order to shock and to provoke a response. It certainly did.


The letter was addressed to Murdoch’s friend Andrew Fisher, who happened to be the Australian Prime Minister at the time. Fisher had asked for an honest appraisal of the situation in the Dardanelles. What he received from Murdoch was a searing indictment of the cavalier British attitude towards the troops and their suffering.  In its opening pages, Murdoch’s letter describes the Gallipoli campaign as 'undoubtedly one of the most terrible chapters in our history'. 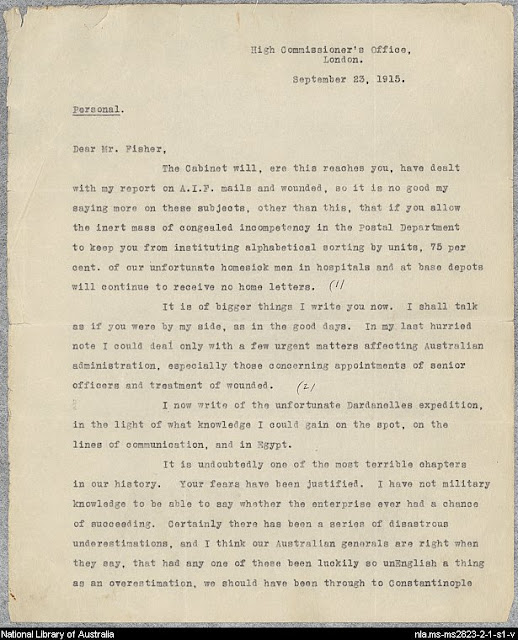 In London, Murdoch met with senior members of the British government who then persuaded the British Prime Minister, Henry Herbert Asquith, to read the letter. Asquith had it printed as an official War Cabinet paper and circulated to the committee in charge of the campaign.  The decision was made to withdraw General Sir Ian Hamilton who was in command at Gallipoli. The winding up of the deadly and unproductive Dardanelles campaign would soon commence.

The conversational yet brutally honest letter thus played a key role in ending the Gallipoli campaign and in the evacuation of British and ANZAC troops from the peninsula.  By January 1916, all Allied troops had been successfully withdrawn from Gallipoli without loss of life, despite the fears the British command held.

Murdoch was later criticised for evading the terms of the official censorship declaration which he had signed at Gallipoli and also for overstating the case. But Murdoch felt that as he was writing to his Prime Minister, at the PM’s request, he was absolved from this stipulation. Murdoch probably also felt able to write so freely because of the terrible loss of life experienced in only five months, together with the coming winter and its potential death toll. To him it must have seemed terribly urgent to get a response and reaction to his letter.


The Gallipoli Letter was given to the National Library in 1970 by Rupert Murdoch with other material from his father’s personal papers. The letter has been digitised by the NLA and can be read in full at the link below.

Posted by Ballarat Library at 2:37 pm