Do you recall what you were doing on ANZAC day?  How long ago that was already?  But the 100 year old Courier this week has headlines that show the fighting in Gallipoli continues without abate: 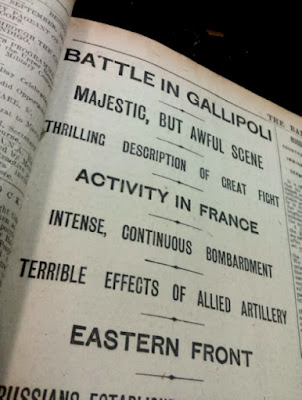 All through this article about the latest battle, reference is made to Hill 70.  But I've checked resources and dates and I am sure that what is being referred to, are the terrible battles around Hill 60.  The headlines indicate that the war is still 'thrilling', despite the heavy losses that are occuring.

The 8th Battalion meanwhile, are about to be relieved from their positions at Steele's Post and Courtney's Post.  By the end of August only 307 officers and men of the original battalion of 1000 remained at Gallipoli.  In early September the Battalion were officially relieved by the 21st Battalion, but some of the 8th stayed in the trenches a few more days to allow the newcomers to adjust.

The relief at coming out of the trenches is expressed in Percy Lay's diary:

It was about time.  Had the best sleep that night and it was the first time we slept with our
boots off for the last five weeks.

Posted by Ballarat Library at 5:34 pm