The Ballarat Courier, Tuesday,  August 18 1914, p. 4, gives a splendid description of the 70th regiment in camp in Queenscliff.   Its wonderful reading, very Boys Own, chin up, what-ho stuff.
They must have been having a lovely time.  There was a footy match between the Infantry and the AMC*, and as the Infantry had in its ranks many prominent League, Association and school players, the results were foregone, the AMC going down by 33 points.  There was the first lady visitor to the 70th Regiment Officers’ Mess “at the first camp while on active service”.  Importantly, there was duty in Melbourne guarding various institutions, as well as the cordite factory and artillery magazines.

And here is the blot on the landscape.  Those on duty returned to Queenscliff unexpectedly early, and dinner had been ‘off’ for some hours.  Were the troops to go without their tea?


Not at all!  Here steps up “the dauntless Sgt-cook J. Wiles” and utilising his patent cooker he had a hot meal ready for the 150 men in 15 minutes!
James F. Wiles was born in Clunes in 1883, and was educated in Ballarat.  He definitely sounds like a “character” eventually getting himself to the Boer war by subterfuge, having been rejected 3 times. In South Africa he had many adventures including working as a rough rider to break remounts, and surviving the Woolmarannsrust disaster. (I don’t know what that was but I am going to have to look it up!)


Back in Ballarat in 1903 he joined the 7th Australian Infantry Regiment, retiring years later with the rank of sergeant.  It was during this time that he determined that the system of cooking in the field needed improvement, and this led him to invent and patent the Wiles Travelling Kitchen – an object which gave “keen satisfaction to brigade and battalion C.O.s and men.”  It was utilised for the troops throughout WW1, but was also very useful to farmers.  He established a cooker manufactory in Doveton St South in order to keep up supply to the Federal Government during the War. 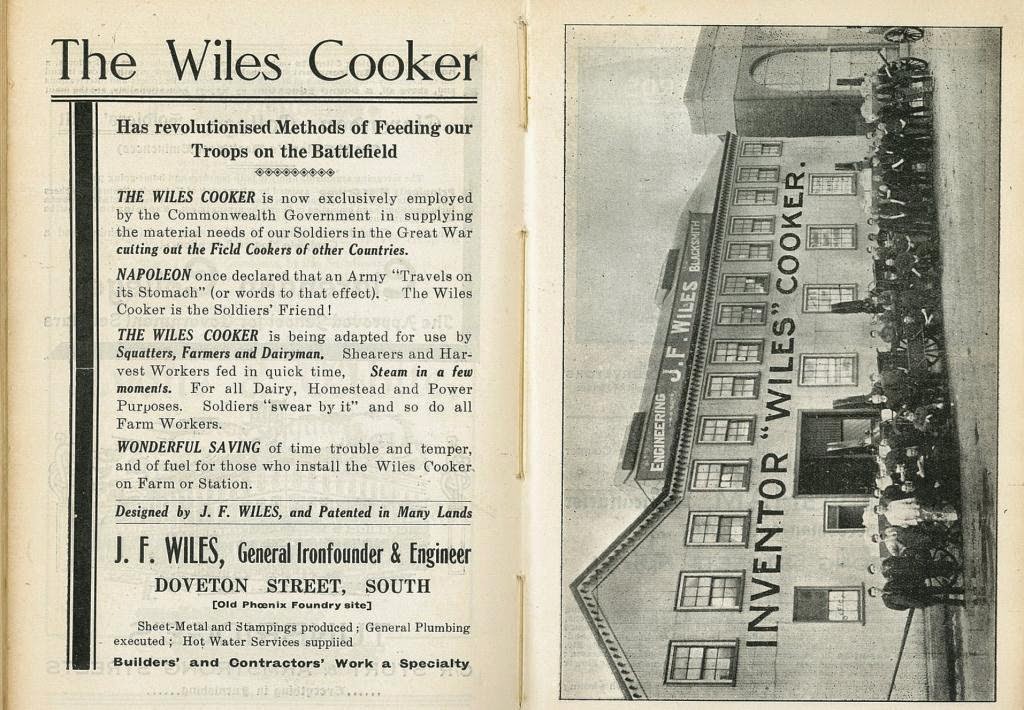 From “Citizens and Sports at Home and Abroad” in the Australiana Research collection, Ballarat Library

Wiles evidently had a fine baritone, and won prizes at various competitions, and he sang at charity concerts. As could be expected, he was an excellent shot with the rifle, winning many shooting matches.  He also served with the City Fire Brigade.
However, after the First World War, his life became rather complicated.  James Fletcher Wiles died in Adelaide in 1939, just prior to the Second World War.  WW2 saw further adventures of his family with steam cookers; it is a wonderful story and you can read more about James, his sons, and steam cookers here.  James Wiles is undoubtedly one of Ballarat’s heroes.


You can read the article ”With the Troops at Queenscliff” from the Ballarat Courier, August 18 1914, here

* I think AMC stands for Army Medical Corps, but please do correct me if I’m wrong
Posted by Ballarat Library at 4:26 pm