The end of the great war: Armistice

The 11th of November will commemorate the 100th anniversary of the end of the Great War. The Armistice of Compiègne between the Allies and Germany came into effect at 11am on the 11th November 1918. The guns fell silent on the Western Front and after more than four years of unimaginable bloodshed and destruction, the war was finally over.

The Armistice paved the way for the signing of a formal peace treaty, the Treaty of Versailles, and the end of the war six months later. On 28 June 1919, the treaty was signed in the Hall of Mirrors at the Palace of Versailles, with Australian Prime Minister William Morris (Billy) Hughes and Deputy Prime Minister Joseph Cook adding their signatures on Australia’s behalf.

At home in Australia, large crowds gathered in capital cities and towns to celebrate the end of conflict.  Jubilant scenes of thousands rejoicing was played out across the world as peace was announced at 11 am.
On the day the hostilities ended on the Western Front, the AIF in France comprised almost 100,000 men.  Monash stood at the head of an army considerably larger than the original British Expeditionary Force (BEF) of 1914, but more important than numbers was its capability.  Each of those five battered and bloodied divisions was infinitely more capable and deadly than the original Australian forces raised back in 1914.  In four and a half years Australia’s deployed forces grew seven times in size and were transformed from rank amateurs into seasoned soldiers. Almost 62,000 Australians died fighting for our freedom and in service of our nation. Thousands more died of their wounds or from the mental anguish they had experinced. 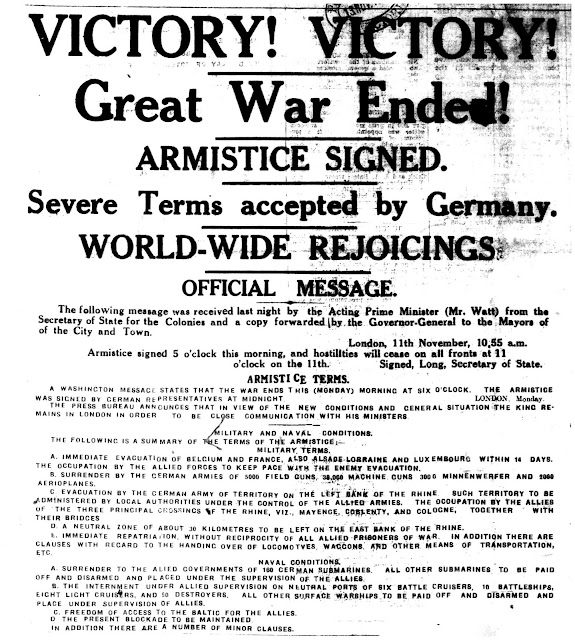 When the war ended there were 167,000 Australian servicemen overseas - spread throughout Europe, the United Kingdom (many in hospitals and convalescent homes), and the Middle East. The logistics of transporting these men home were formidable.  Railway systems throughout Europe and the UK were choked with traffic and the demand for shipping was greater than ever, with Allied countries competing for troop ships.  All the troops could think about was "getting home", and movement of the AIF proceeded fairly smoothly and by the end of 1919 almost all Australian troops had been transported home.
Posted by Ballarat Library at 12:14 pm

Email ThisBlogThis!Share to TwitterShare to FacebookShare to Pinterest
Labels: Armistice