After Bullecourt: the Four Sons of Mrs Buckingham


This enquiry came to us in the Australiana Room from a gentleman doing some research on his wife’s family:

In my research for my Family Tree, I have been given photos of the four Buckingham boys – George,  William, Bob and Frank – under the heading “Four Sons of Mrs Buckingham”. I believe the photos come from the Ballarat Courier but they have no date, except for a caption under Frank’s photo “Now in France”. All four were soldiers in the first World War. Two of them were killed in France – George and young Sam both on April 11 1917, and Bob wounded three times. Frank enlisted for two tours of duty.  I am told the photos were in the Ballarat Courier some time in 1917, because Mrs Buckingham and two of the sons came from Ballarat. But two came from WA, so it could be a WA paper.

I responded to this enquirer that he should get onto Trove as the National Library has digitised newspapers all over Australia from the Great War period.  By looking in Trove using the title of the article as a search term he should be able to find what he was looking for – it wouldn’t matter which newspaper – he didn’t need to search papers individually.

The next day my colleague Simon was turning the pages of the 100 year old Ballarat Courier, and I noticed the page he had selected for display included about 8 photographs in the “Roll of Honour”.  I remarked what a good page it was to have open, and stepped closer for a better look.  Imagine my surprise to see two of the Buckingham sons included in those images! 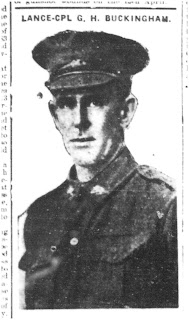 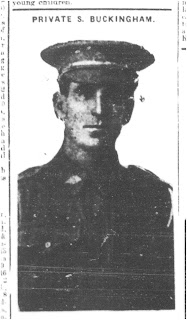 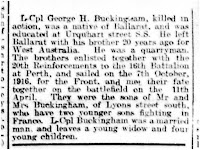 Before I could email my enquirer about this coincidence, there was a phone message from him, to say he had located the article required, in the Kalgoorlie Sun.  You can try the search yourself in Trove if you wish to see it.

The two Buckingham men killed on the same day were with the 16th Battalion at Bullecourt.  They had enlisted together in Perth (Service Record Numbers 6237 and 6238), they both sailed to England on the Suffolk, and then to France together, and died together in the same battle on the same day.

Poor May Buckingham, William’s wife, could not accept William’s death and in 1930 wrote a tragic letter to the Base Records, questioning whether he really was killed in action – or was he a Prisoner of War? – as she had such strong dreams of him coming home.  She received a brisk letter from the Army records department, advising “all prisoners of war have long since been repatriated” and that his name would be inscribed on the Villers Bretonneux memorial.

Only two of the Buckingham sons are memorialised in the Avenue of Honour in Ballarat, the two sons who enlisted from Ballarat - Tree 787, R.T. Buckingham 5th Battalion:  Tree 1111, Frank Buckingham 16th Battalion (planted 13.7.15 by Mrs Buckingham herself in the “Sunnyside Woollen Mills Employees section”).  The two sons who enlisted from Perth are memorialised at Villers Bretonneux, and in this death notice in the Ballarat Courier on May 12th, 1917, which reflects the numbers of casualties from the Bullecourt battles:

Posted by Ballarat Library at 5:25 pm