The man who lied to the King


Over the past few weeks we’ve been blogging the Diary of C.W. Kyle, who worked as a steward on board Troopships during World War 1.  He has had many adventures and if you haven’t already read the diary, we suggest you go back and do so before reading on here.


For those who have already been absorbed in the Diary, today is the day we spill the beans on Mr. C.W. Kyle.   This is how it happened. (with apologies for a very long post)

We were aware of the Diary in our collection but neither of us had read it.  We did know that it was WW1 material however, and we decided that it might be an interesting thing to add to the Ballarat 1914-1918 blog.  So I set out to read it, but it was slow going reading Kyle’s original handwriting.

One day I was shelving, and a small volume happened to fall off the shelf into my hand.  Imagine my surprise when I saw the title “The diary of C.W. Kyle: transcribed by A.J. Walker”.  I couldn’t believe it was the same diary, but it most certainly was.  I read it over my lunch hour, and to say I was amazed is a total understatement.  I am sure if you have read the Diary, you will know what I mean.

According to the age Kyle gave on his discharge papers he should have been born about 1870 so I looked at the Birth Death and Marriage records to locate Kyle’s details.  There was nothing.  I tried to find at least a family of Kyle in Ballarat at about the right time. Nothing.

Who is he? He's articulate, confident, well educated, thoughtful, not afraid to put his views "out there" - what is this all about?

So in frustration, I turned to Trove.  Good excellent Trove, the solver of so many mysteries. I put in “Charles Kyle” and this was about the first thing that came up. 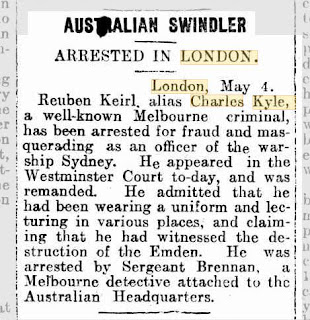 Oh Reuben Keirl great, now I have a name. I rushed to the Births Deaths and Marriages: and yes! There they all are, Mum and Dad Benjamin and Susannah, and there is Ruben/Reuben and his brothers and sisters being born (and also dying) in Sebastopol districts and Ballarat.
But, hang on, there’s Ruben/Reuben being born in 1861 – why, the cheeky blighter, he’s knocked 10 years off his age.  His discharge papers say “about 44”; about 54 would be more like it.  And wait, what was that about being arrested?

I dashed back to Trove.  Now I have his correct name I’ll put in “Reuben Keirl” … oh dear. Over five hundred results...


Here he is being arrested for impersonating an officer in London, a longer account than the one above.

The news was reported all over Australia, and as you can see the article above comes from a northern NSW newspaper.

And evidently, it wasnt the first time. Here's another, earlier, clipping from The Age

The man, it seems, is incorrigible. At least now we know a bit more about when he left the ship in 1916 with a damaged leg - his diary says Port Pirie and here it is reported as Port Fairy, that is possibly a mistake by the reporter, but at this stage, who knows?

But, think! If he was born in 1861, and the Princes visited Ballarat in 1881, he could not have been "the boy who sang and was born at Sebastopol near Ballarat April 13th 1871."  He would have been around 20 years old in 1881.  Maybe it happened to a young friend - maybe he witnessed the event - but it wasnt him.  And yet, he wrote and told the King it was so!  That whole episode of being under arrest in Glasgow is puzzling, because if he wasn''t a British subject, wouldn't they have just interned him?  Weren't Australians British subjects at that time? Did he really write to the King? Did the King really get him off that boat at Plymouth?

There's more, so much more.  Keirl is "notorious".  In 1906-7 there is a peculiar incident involving the Victorian Government; somehow he has hoodwinked the Premier, Mr Bent, into give him a job involving travelling to England to promote the resources of Victoria. (The Government hastily withdrew the project.)

In 1909 he tried to sue Madam Melba (for 2000 pounds) for not appearing at an exhibition he organised.

And in 1896 there was a matter involving hypnotism.


There was an unsavory episode between Keirl and a young woman in 1912, when she threw vitriol on him in an effort to make him leave her alone.  There was an even more unsavoury episode in the 1890s when it was reported he was at a post mortem examination, saying he was a medical student. But then, in fact, he wasn't, and had to admit he'd made the whole thing up.

In fact, if you search Trove with "Reuben Keirl" I can promise you a couple of hours of incredulous reading.

I think he really did write to the King.  At this stage, I wouldn't put anything past him.


So now, I am taking another, very critical look at the Diary.

What to make of it?

Who did Keirl write this diary for? Or why?

There are certain parts where the tense or the narrative is slightly strange, for example when in Glasgow and appointed night officer, he states on the first day, "I stayed in that job 26 days" ; he could only write that if it was in the past.

Why does his description of the Panama Canal run in reverse to the way he actually sailed through it?

And at least now we know why there are so many gaps in the London descriptions. I havent yet had time to go back and compare the dates of the entries with the dates of the newspaper articles describing his arrest.  But "it was not my intention to leave England for 3 months" now seems very suspicious, if not hilarious.

But he really was there: the letter from the munitions workers on the Demosthenes must be valid, and all his discharge papers.  And the Demosthenes did end its voyage in Glasgow. All that the National Archives of Australia have to say of him is :


The writing in the diary is very regular. I keep a journal, and some days when I am tense and stressed the writing gets small and cramped. Other days, if I am weary but happy, the writing becomes all big and loopy.  Keirl's writing never seems to alter.  It is another thing that makes me think it was written at a later date, perhaps compiled from a series of smaller diaries - as this one is quite large to be travelling with; it is foolscap size.

So is it a historical document or not? It is an interesting reflection on the use of diaries in historical research; the tension between concealing and revealing, between telling all or keeping silent.  This diary is a classic example.  Not one word about his "notorious" career. Nothing about jail in England. But plenty of indignation at being held under military guard - is that because he really did feel wronged at that point?


And what of the physical diary itself? We don't know how or why it came into our collection. There is no accompanying documentation.  Below is the Introduction from J.A. Walker's transcription, I give it so you will know as much as me about this. Why oh, why doesnt he state where his place of work was?  I contacted the  Military Historical Society, re A.J. Walker, but no response to date. 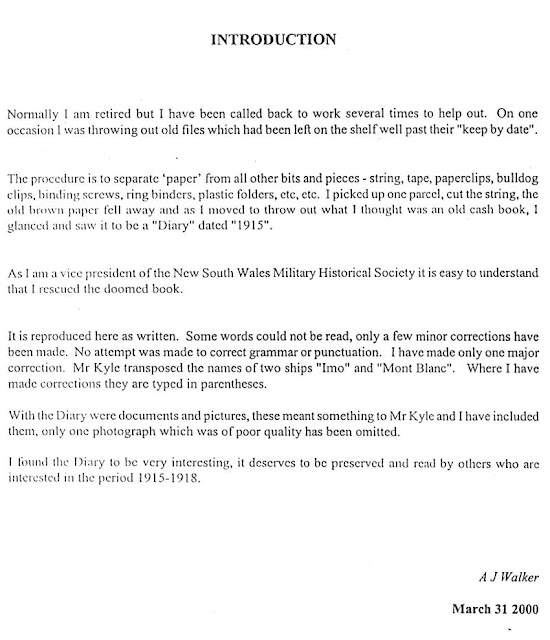 Keirl is clearly charismatic. He's charmed and hoodwinked people all his life it seems. He's gone and fascinated me.  He is irrepressible, even years after his death.  He died in "Park", Victoria in the 1920s. I have yet to discover if that means he was in the Royal Park Asylum.  Maybe someone reading this will pick up the research threads I have left lying. He finally disappears from Trove in 1918.

The Diary itself is safe in the Australiana Room, and if you visit and would like to see it, just ask.  We'd be delighted to hear your thoughts.