Richard Wells was the subject of a previous post (24th November 2014), where we found that he was not a Ballarat man, but included in the Avenue of Honour.  His father in law, Con Burrow, lived in Ballarat, and I became curious to know who he was.

This is his entry in Citizens and Sports, one of our favourite resources in the Australiana Room: 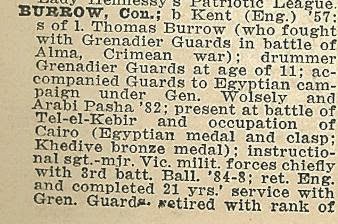 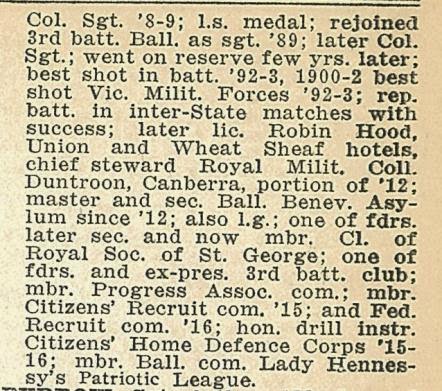 Goodness! Can you read all those abbreviations? Con Burrow is evidently one of Ballarat's outstanding citizens, a publican and a military man. Both his sons, Sgt. Arthur Alfred and Lieutenant Sydney are with the AIF, in the 8th and 7th battalions, respectively.  I see now that Richard Wells would have been welcomed into the Burrow family, and everyone must have been very pleased to see that he had been promoted to Major on January 1st.

Imagine Richard's wife - her husband and both brothers on active service.

And this is a link to a quite splendid photograph of Con Burrow, held at the State Library Victoria.

Posted by Ballarat Library at 11:57 am